By Gerald Hopkins On March 13th the NBA2k League held it’s four draft, and saw 62 players get a chance to make an impact with their new teams.  Pick 1: Lakers Gaming Selected Arshia “Krazy” Karimi  Lakers gaming was in a crazy spot, as before their first pick they traded away their point guard Sten…

On March 13th the NBA2k League held it’s four draft, and saw 62 players get a chance to make an impact with their new teams.

Lakers gaming was in a crazy spot, as before their first pick they traded away their point guard Sten “SAV” Valge-Saar to Heat Gaming for the seventh pick in this draft, and that only left them with one player on the roster before the pick, Wady “Tactuk” Tactuk. Tactuk played primarily small forward for Lakers gaming, and is expected to play center for the team this year. This was an important night for Lakers gaming, as they were planning to fill up to four rosters spots in one night.

Lucky for Lakers Gaming, Krazy was expected to be the first pick in this draft because of how good a two-way player he is. Arshia “Krazy” Karimi can play anywhere in the front court, and averaged 19.8 points, 9.8 rebounds, and 5.7 assists in the combine process. In the graphic that the NBA 2k League put for his profile, for strengths they put “Best all-around player in this class” and for weaknesses put “no true weaknesses.”

This high praise for Krazy will quickly be put to the test, because Lakers gaming will need him to be everything he is hyped up to be. I expect Krazy to be the focus point of the offense, and his play will be vital in Lakers gaming going up from rock bottom.

Having the second pick seems to be a positive trend for the Pacers, as the actual basketball team has seen some of it’s best players drafted with the second pick (Rik Smits, Kelsey Mitchell). Those are some tough shoes to fill, and Enrique Xavier “630” Barazza is tasked with that challenge. The combo guard averaged 35.5 points per game (!), 9.0 assists, and shot over 50% from three point range in the combine. The NBA2k League graphic stated that he is the “best combo guard in the class.”

Yet 630 is walking into a tough situation, because the Pacers historically lacked two things, a point guard, and a consistent lineup. The lack of consistency is in-part due to the lack of trusting someone to run the point guard position, and the high draft pick of 630 shows how Pacers gaming expects him to perform.

One of his weaknesses that the NBA 2kLeague graphic stated is that he has the “highest usage rate player in the class.” 630 is a heck of a guard who can create tons of plays, if he has the ball. If Pacers Gaming gives him time to gel, this can be a great pick, but with their reputation of moving on quickly 630 has his work cut out for him.

If you thought a draft in an Esports setting was already weird, how about I throw in a trade on draft night to confuse you some more. Gen. G, the only Esports franchise to be in the NBA 2k League, had the third pick in this draft, and then traded it for Alexander “Bsmoove” Reese, a shooting guard from Warriors gaming. One of the pillars of Warriors gaming was moved for Hezi “Hezi” Coates with the third pick.

This was somewhat of a surprising move, as Warriors Gaming was competing in the Finals a year before. But there were some rumors of Warriors Gaming making a move for Hesi, which ended up being true. Hesi is a great shooter, and according to the NBA 2kLeague graphic about him “One of the only true 2-way players in this draft.” For everyone this move was a bit of a surprise, because Bsmoove seemed to be synonymous with Warriors Gaming, but Hezi does bring a varied skill set to Warriors Gaming, and could be a piece we see change the outcome for Warriors Gaming next year.

More trades! This pick originally belonged to Pistons GT, but was a pre-draft day move which saw 76ers GC trade away Ethan “Radiant” White and some other picks which they swapped with Pistons GT. Here is an image of the full trade.

With this in mind, 76ers GC took Andre “Dre” Marshall. The pick, announced by 76ers basketball President of basketball Operations Daryl Morey, was the second point guard taken in the top 5. Dre is an interesting pick, because he is very good, his combine stats included him averaging 29.6 points per game, 9.6 assists per game, and almost averaging a steal (0.7) per game. The one question that people have about Dre, like the NBA 2k League graphic put it “Can, do everything on the court needed, but what makes him different?” Dre is a bit of a jack of all trades, but his high draft number will force him to be more of a star. 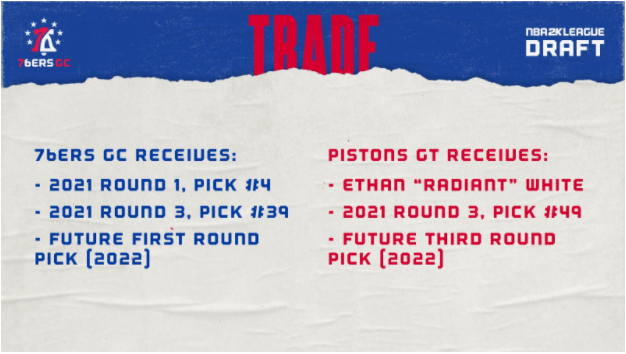 Dre will have some time to change his identity as 76ers GC finished last season with seven wins and nine losses, and I think Dre has the skills to take 76ers GC above 500.

Celtics Crossover had both the 5th and 6th pick after trading point guard Albano “oFAB” Thomallari to Cavs Legion Gaming for two first round picks in the 2021 draft. This first of two picks was Torin “iBallTay7o” Williams, a small forward who is one of the best defenders in the draft class.

iBallYay7o is a specialist player, who built his player and playstyle around being a defensive small forward, he lacks the ability on offense to dribble, but trades it with some of the best defense in the league. iBallYay7o averaged 2.1 steals in the combine, an impressive stat in NBA2kLeague. iBallYay7o isn’t supposed to save Celtics Crossover, and that’s okay.