By Alex Wilson Getting Started It’s no secret that as the digital age advances, technology and entertainment advance along with it. Sports are no different. As gaming as a pastime transitioned into a collegiate and professional sport, League of Legends helped lead the charge at the highest levels. National and Global level tournaments are held…

It’s no secret that as the digital age advances, technology and entertainment advance along with it. Sports are no different. As gaming as a pastime transitioned into a collegiate and professional sport, League of Legends helped lead the charge at the highest levels. National and Global level tournaments are held each year honoring the best players in their fields.

Before you dive into the complex world of League of Legends, we are going to help you to create a baseline of knowledge so you do not get completely lost in the fold. The most basic aspects to start with are the objectives and an understanding of “what is league of legends”. According to Riot Games, League of Legends is “… a team-based strategy game where two teams of five powerful champions face off to destroy the other’s base.” In each base is a nexus crystal guarded by powerful stoic towers, the champions, and long waves of minions.

The map itself is divided into three lanes (Top Lane, Middle Lane, and Bottom Lane) with each lane leading to the nexus. Between the lanes is a lawless “jungle” area where special monsters and living objectives, such as Baron Nashor or The Dragon, spawn. This area is usually traversed by “Junglers” who’s job is to collect gold from individual jungle camps (Monster spawning areas), apply pressure and help other lanes, and kill living objectives. This area is also home to the “Fog of war”. This mechanic limits the players field of view and makes it easy for players to move around without being seen. Wards are placed around the map by each team in hopes of gaining a vision advantage on the enemy team. 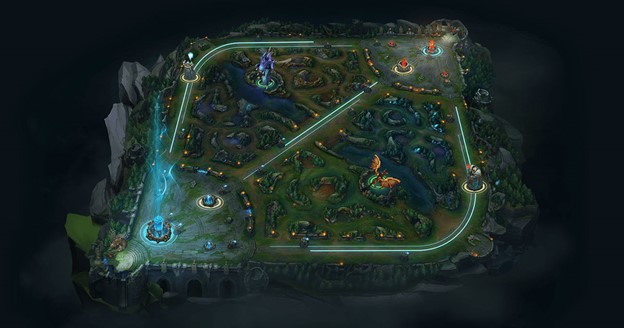 The rosters of each team are divided according to the players individual lane preference. Players take the role of, Top Laners, Mid Laners, Junglers, Bottom Laners, and Supports (players who support bottom laners early and the whole team later). This standard is how coaches create strategies and confer important titles, such as shot caller or invoke the five-point start.

League of legends morphs and changes shape as the game progresses. Due to the relatively weak state of each players champion early on, players tend to stay in their respective lane and kill or “farm” the minions. Each minion kill gives gold with the weakest giving 14, the hardier ones giving 21, and mega minions riding cannons giving 60, until a minute and a half. After that crucial minute and a half these numbers increase so that the game’s pace increases as well.

After roughly 8 to 10 minutes the players will usually break their usual pace and interact with other lanes and other objectives on the map. This is where a lot of the early fun happens, large plays, objective steals, and first blood usually happen around this time. Around 15 minutes the first phase or laning phase ends. Now it is onto the mid game. This is where the bulk of the entertainment lies as teams form complex strategies and put them into play. This is also where champions either fall off (lose relevance) or scale up (gain relevance) in teams.

After a plethora of skirmishes, objective kills, and gold generation, the teams will usually pick a strategy to end the game. This strategy morphs based on the state of the final phase. The End Game. At the end of the game, champions are usually the strongest they will ever get, everyone has purchased the maximum number of items allowed, and bases are usually open to attack. Here the game becomes do or die, a champions death means that their respawn time will take a long time. In the beginning of a game a champions death takes a short amount of time to recover from, usually seconds. At the end of the game, it can take as long as 45 seconds for a champion to respawn from a death. This could spell the end of the game in some cases.

Understanding the Heads-Up Display, Or HUD 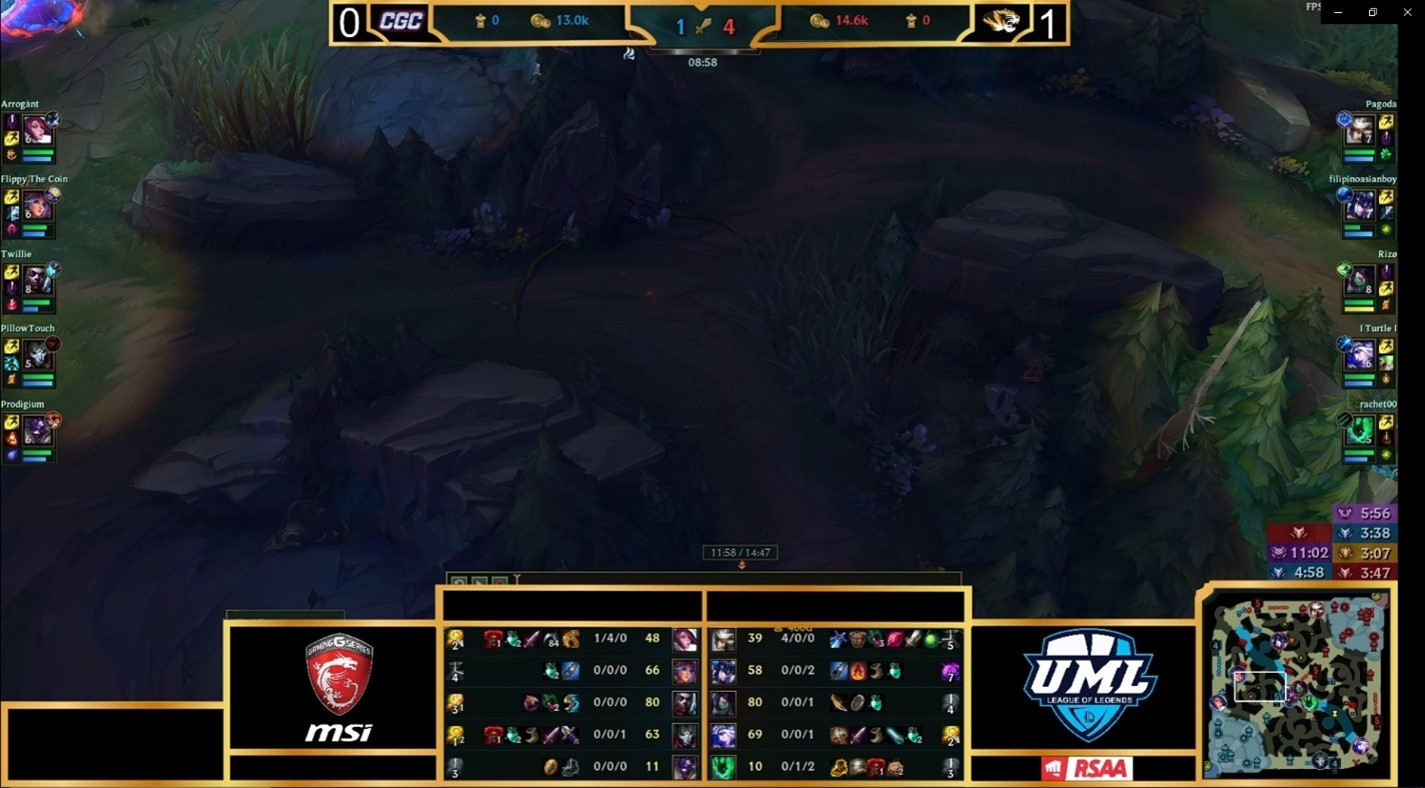 Above Is a typical screen for a league of legends stream. In the bottom middle is the scoreboard. This is where a bulk of the information of each champion comes from. The numbers in yellow indicate how many minions each player has killed and the numbers in white indicate Kills, Deaths, and Assists or KDA’s for short. The bar next to each players KDA is their items, this show us what items each player has purchased and an insight into their strategy.

To the far right is the map, this is a standard display that shows the movement and state of the map. Above it is the countdown timers, the one at the farthest right shows the timer for Rift Herald, a tool that junglers use to quickly break down towers. The second purple timer at the bottom left is the Baron Nashor timer, indicating when it will be spawning. Baron Nashor is a siege buff allowing players to boost the damage of their minions and allow for longer periods of siege. Directly to the right of the Baron timer is the Dragon timer. The dragon is a recurring buff that gives independent team buffs that do not end until the end of the game. These buffs are based off of the type of dragon that is slain. The current dragons are Ocean, Mountain, Fire, and Wind. There is a fifth dragon, Elder dragon, but it is a little special.

Finally, on the right and left of the screen are more champion portraits. These tell the audience which abilities are on and off cooldown giving you and insight into what moves a player may want to make.

The only thing left to do is sit back and watch the game. Grab a big tub of popcorn, a soda and your friends and watch your favorite teams hit the rift.